The Music is the Message: Sample-based Music Gets Political 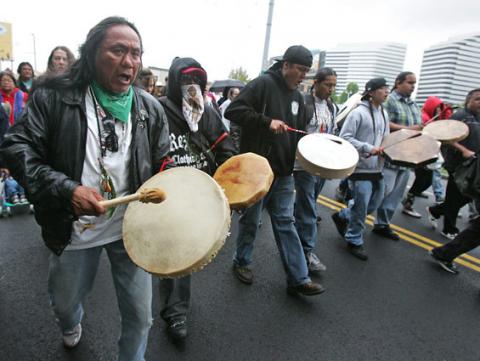 Sampling - the act of remixing and reappropriating sounds from other songs to create something new and original - has been a longstanding musical practice.

While many hip-hop artists have been sampling hooks, melodies and vocals from songs for decades, it is the more experimental electronic artists that are sampling unconventional sounds that are catching my attention.

Ottawa’s internationally renowned A Tribe Called Red (ATCR) is often known for their party anthems played during ‘Electric Pow-Wows’. Their song ‘Woodcarver’ however, strikes a chilling, painful note about stereotyping and the power of police brutality. ATCR had to say of the song:

‘This track is to make aware of the unjustified actions of a police officer in Seattle. On August 20, 2010 a woodcarver by the name of John T Williams was shot 4 times by Officer Ian Birk who was not criminally charged by law enforcement.’

The song contains distorted and spliced audio of news clips, interviews with citizens, Birk’s voice yelling, “Put the knife down!”, as well as multiple gun-shots.

Williams struggled with problems with addiction, and was often too intoxicated to understand what those around him were saying. Those who were close to him also said he was hard of hearing and partially deaf in one ear.

While ATCR uses the combination of their heavy hitting beats with some powerful sampling to tell a clear, and painful, narrative, others use sampling to create a thought-provoking piece, in which the context and message is less clear. Toronto’s Quillbox, the new electronic/experimental outlet of Marc Meriläinen, is a step in a new direction for the musician, who’s former project NADJIWAN showcases his musical talent through guitar and lyric driven songs.

One of Quillbox’s more popular songs, The Apology, samples Prime Minister Stephen Harper’s Official statement of Apology to former students of Indian Residential Schools (IRS).  Like Woodcarver, The Apology also uses effects such as vocal distortion and delay, and vocal splicing to create an intriguing experimental piece driven by an aggressive beat.

The song uses a quote from Harper’s apology where he states that using IRS to “kill the Indian in the child” was wrong and has caused great harm.  At about the three quarter mark, the breakdown features a vocal sample that isolates the words “kill the Indian”, and repeats them in a creepy robotic manner.

While sentiments of anger seem to ring through most of the piece; the last twenty seconds of the song feature hints of major notes gleaming through on distorted synths, played over the words, “It was wrong, and we apologize”.

Perhaps this is a statement that, although years of brutality and abuse cannot be undone or forgotten, an apology is a step in the right direction towards reconciliation. Whatever thoughts or emotions these two pieces may provoke, they are a testament to the power of music in sparking political conversation, and sample-based music being an innovative force in doing so.

Photo by Susan Platt of Art and Politics Now

I always feel that Music has got the power to transform humanity. Every musician is specially gifted and they have got the responsibility to inspire and encourage other people. The music sampling by this tribe band has a real message. selling miles