Women of the world making some noise! 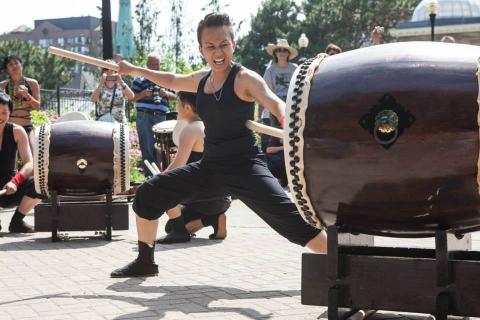 In my search for World Musicians, I recently discovered NIMBAYA!, an all-female drum and dance company based in Guinea, who are currently on a world tour ("The hit of Montreal's Nuits d'Afrique Festival!" according to Ottawa Express). Their bio on their website begins like this:

"NIMBAYA! is a daring response to taboos stretching back thousands of years. Never before had women played the djembe in West Africa, the instrument being historically reserved for male players. In 1998,...Mamoudou Cone realized the world was ripe for change and decided to create an all-women percussion and dance ensemble." And thus, NIMBAYA! was born.

My own mother is a percussionist. Growing up, I had (and continue to have, actually) the joy of watching her tapping out intricate rhythms on the tabla or pounding beats on the Sinhalese geta bere or yak bere - noise enough to shake you up inside! I consider myself lucky to have always known the literal, physical strength of women's hands, because I've grown up seeing it and hearing it firsthand. I've always known that women can be amazing percussionists.

So when I gradually began to notice that there aren't a whole lot of female Sinhalese drummers around - and that this holds true of many cultures, actually, including North American and European cultures - I was baffled! Of course women can drum - so why aren't there more women drumming?

Anyway, the world is ripe for change, as NIMBAYA!'s bio says. There's greater equality in all sectors now, including the arts, and today there are a number of amazing female percussionists on the scene. Just check out the Toronto-based Raging Asian Women (RAW) Taiko Drummers, an all-women Japanese group that "exists as a critical response and challenge to both systemic and internalized oppressions," or Naghmeh Faramand, a Persian drummer following in the musical footsteps of her father. Around the globe, and right here in Ontario, women are entering the world of drumming with an energy which might have once gone unacknowledged by a male-centric mode of documentation, or even altogether untapped.

I've also recently entered the world of Sinhalese drumming myself, following in my own mother's footsteps. I can't express how awesome it is to be able to strike an instrument with all the force of my fingers - how awesome it is just to shatter silence and create some noise. That's an awesomeness I hope anyone can feel free to take part in, and I'm glad we're getting there.

(photo above from the Raging Asian Women Facebook page)