Music as a gateway and an invitation 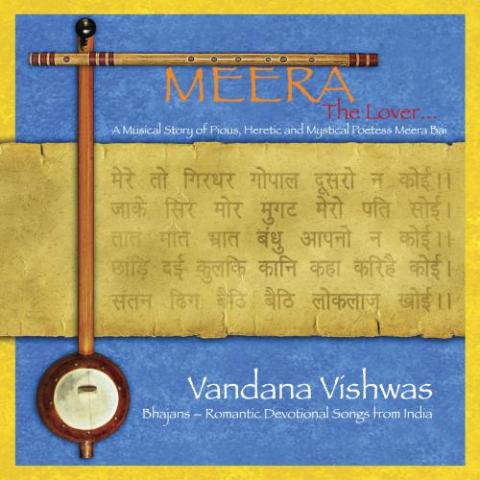 In the few weeks that I've been working with OIMA, I have encountered some seriously amazing musicians (exhibit A! exhibit B!), but one of my favourites so far has to be Vandana Vishwas, whose crystalline voice and classic arrangements I find so engaging. A song is an awful lot like a story; if it's good, it can take you elsewhere - and this is just what Vandana's songs do for me: they lure me away from the here and the now.

What I find intriguing about her first album, Meera - The Lover..., is it's strong North Indian influence. The songs are based on the 16th-century literary works and tragic story of Meera Bai, a once-respectable Rajasthanian princess whose love and fidelity for her god, Krishna, lead her to forsake her traditional duties, to be scorned by her family, and to be exiled by her patriarchal society. She is the personification of bhakti, devotion.

The songs are adorned by raags (elements of Indian classical music, dating back centuries) and accompanied by instruments that contribute in some way to the narrative, like the flute, used to represent the presence of Krishna (who is often found, in Hindu artwork, playing the instrument to herd his followers).

Listening to Meera - The Lover, I'm drawn in and compelled to learn more about Indian classical music and literature. The album is both a gateway and an invitation to a world exuberantly rich in culture and beauty.

Much of the experience of art is visceral pleasure, but I think there's also a wealth of collective and personal history to be understood beneath any piece. And these two aspects of art - the one, emotional and intuitive, the other, mindful and deliberate - compliment one another to a tee: the pleasure I take in a song is deepened when I get to know where that song comes from, and my appreciation of where a song comes from is deepened because I can enjoy that song.

This is why, in a nutshell, it's important for people to seek to experience unfamiliarity through the arts: artists - whether storytellers, poets, dancers, or musicians -, if they're good (and if we allow it), can extract us from ourselves, ultimately opening us to other cultures, other narratives, other people.