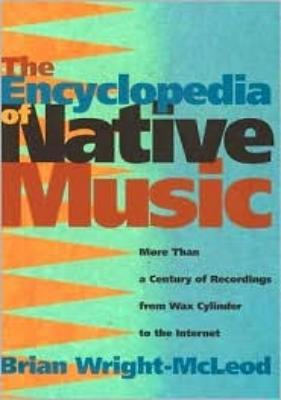 As one of the two Aboriginal Music Archive Coordinators for OIMA this summer, it is my job to research and uncover different musicians from the past and present. This can be stressful at times. While I have discovered several websites and resources through Google which have been very useful (RPM.fm, ReverbNation, etc.), the internet can still be surprisingly limited.

As I was desperately searching for new databases of musicians, I was directed towards a book called The Encyclopedia of Native Music by Brian Wright-McLeod. A book! Why had this never crossed my mind? Excited in the prospect of a new resource for my research I hopped online and went to Amazon in the hopes of securing a copy. To my horror, it was priced at nearly $100. What was I going to do?!

Then I remembered that there was a library down the street. Upon closer inspection, they even had a copy of the Encyclopedia! Overjoyed, I skipped the two-blocks to the public library and found their copy. While I am used to using libraries in university to research largely boring topics, I had become unaware that people still go to libraries for pleasure (checking out, apparently my library card had been last used four years ago).

Thankfully, there are no signs of closing any libraries here in Ottawa, but remember the effort by the Ford Bros. to shut down some in Toronto? Of course this development in the U.S. shows a hopeful development in the other direction.

But digress. I arrived back at the office with my new resource in tow, opened it up, and started discovering a wealth of music form Indigenous artists from all over North America. Focusing in on Canada, and more specifically Ontario, I begin to uncover some really interesting findings.

Sunshine Music, for example, is an independent label located in Winnipeg which has released a ton of music. The genres on their website list everything from Powwow to Polka! I also uncovered certain First Nations who have produced an amazing number of talented musicians (Anishnabe, Akwesasne, and the Six Nations are the first that come to mind). I also see musical talent being passed down through generations in families such as the Cheechoo’s and the Maracle’s.

Google searches are great for quick research, but they didn’t allow me to understand the connections and history of music by Aboriginal artists in Ontario. Keep in mind, upon writing this post, I have only had this book in my possession for less than a week and have barely skimmed the surface of it (have read about 60 of 450 pages).

Perhaps the most interesting finding that I have stumbled across is a man named Louie Deer (a.k.a. Os-ke-non-ton). Louie was Mohawk and born in Kahnewake, Quebec in 1899. Initially a hunting guide in the Lake of Bays, he was encouraged to by Lenora James Kennedy, a music teacher from Toronto. He recorded mostly between the years of 1920-1925. He died in 1950, but a collection of his recordings titles The Happy Song was reissued by the National Library of Canada and the Canadian Recording Industry Association.

I have yet to uncover these recordings, but am already eager to learn more about him. I have scheduled an appointment with Library and Archives Canada next week and hope to secure some music for OIMA. I’m extremely fascinated by the history of Canadian music and will be sure to write again next Friday and let you know how my search went!