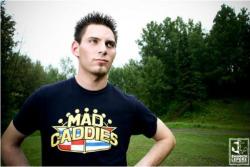 Profile created by:
Jason Wellwood
Are you this artist? Request to become the editor of this profile.
Location:
Northern Ontario›Thunder Bay District›Thunder Bay

From some of the opening lines of Andrew J. Edward's debut solo album, Falling In With The Wrong Crowd, the tone is set that the young rocker has a clear cut message to deliver, as Andrew let's his listener's know that “this is an anthem of what I have to say.”

Born and raised out of Thunder Bay, Ontario, Andrew J. Edwards has been performing steadily in live bands since he was 14 years old; consequently, Andrew is no rookie to writing music and performing live. Rising from the ashes of long time running Thunder Bay punk act, Not At Fault, Andrew Edwards kept the music torch burning by utilizing his rock and punk influences to create an undeniably new and distinct musical project. “I was always into a wide range of rock bands like Green Day, Foo Fighters, Weezer, and Our Lady Peace, but I really came into my own by learning from Fat Wreck punk bands such as Lagwagon, NOFX, and No Use For A Name.” Most certainly these influences show through Andrew's solo efforts as songs range from mellow acoustic to driving rock and infectious hard hitting pop punk to grooving reggae.

The album's first single, Crawling, is a driving rock tune with an infectious chorus hook yet it still manages to maintain a mild punk feel that Edwards holds so dearly.” Coming from a punk background has provided me with a do-it-yourself outlook on music” as Falling In With The Wrong Crowd was engineered and produced in July and August of 2007, by Edwards himself in his home studio. Having written every song for the album over a year and a half period, Andrew has been able to showcase snapshots of his life into a diverse yet cohesive 63 minute pop punk album composed of 16 songs.

This hard working young musician is determined to show the world what he is made of, as Andrew's possesses relentless passion and drive to deliver personable yet inclusive music, which makes for consistent energetic, intimate and memorable live performances. “There's nothing more that I would rather do than perform in front of and connect with a live audience”, which has been one of the key factors to Andrew's longevity and success within the Thunder Bay local music scene, and he “hopes to expand my exposure and explore the rest of Canada in the very near future.”  “I've never been more proud of a musical project than this record. I have spent nearly two years of my life creating this musical montage of my life, and I look forward to sharing it with the world.” Keep an eye and two ears wide open for one of Northwestern Ontario's best hidden secrets who is soon to emerge as an unmistakably recognizable voice.